Collaboration to Help the Community Recover from Fire

* Hardwood Distribution. Lake County Resource Conservation District''s efforts to begin replacing some of the estimated seven million trees lost in the 2015 wildfires began rather modestly, with a donation of nearly 700 oaks and buckeyes from Mike Steen of Coyote Ridge Farms near Geyserville. East Lake RCD directors Dan Desmond and Bill Lincoln made several trips to collect the young trees, which were left in the care of interns Cody McNea and Jack Shrive at Lower Lake and Middletown High Schools, and Kecia Stickney of Frontier Farms in Coyote Valley. Thanks mostly to the efforts of NRCS staff, by late spring they had all been distributed to grateful survivors of the Rocky, Jerusalem and Valley Fires.

#LakeCountyRising is a collaborative fundraising effort of the Lake County Winegrape Commission, Winery Association, and  Wine Alliance.  The Lake Area Rotary Club Association (LARCA) is a non-profit foundation comprised of the 4 Rotary Clubs in Lake County – Lakeport, Middletown, Clearlake and Kelseyville.  Together, these two entities have allocated nearly $60,000 to the RCD to get conifer seedlings planted and the program in place.  By collaborating with the El Dorado/Georgetown Divide RCD’s established native plant seed collection and propagation program, the funds have resulted in the greenhouse planting of 100,000 native conifers – mostly Ponderosa Pine but also including some Douglas Fir and Sugar Pine – that will be ready for distribution in time for the late Winter/Spring 2017 planting season.  The species available are suitable for higher elevation burned areas such as Cobb Mountain.

The discussions regarding funding for reforestation began in early October when Greg Giusti, County Director and Forestry Advisor for UC Cooperative Extension, and Korinn Woodard, District Conservationist with the Natural Resources Conservation District (NRCS), began to formulate a plan that would make it possible to distribute seedling trees to private landowners as promptly as feasible. “We determined that 100,000 trees could be needed this first year,” Giusti said. “We knew getting the seeds ordered and in the planting medium during the winter was the only way to have seedlings ready for planting in late 2016, early 2017.”

#LakeCountyRising representatives were interested in helping to support the effort but any donation would need to go to an established organization responsible for the program. At the same time, LARCA had also identified funding for reforestation efforts as a major priority.

That’s when East Lake Resource Conservation District (RCD) decided they could help bring this monumental effort to fruition. “An experienced agency was needed to lead this effort, and our Board agreed that we had the experience and resources to make it happen, if funds were available.” East Lake President Charlotte Griswold said. “The intention is to make conifer seedlings available for planting each winter for the next few years at a pace that will align with the community rebuilding process and demand”, said Griswold.  “We expect to work with NRCS to start taking advance orders before the end of April and to partner with the Ag and Natural Resources programs at area high schools to organize several community planting projects.”

* Restoring Trailside Park. The RCD is also collaborating with the county Public Services Department to replant Trailside Park on the outskirts of Middletown. Although oaks and chaparral in the 120-acre park are recovering well on their own, there has been almost no conifer regeneration. The county will prepare a planting plan, labor will be provided by Rotary members, students at Middletown and Lower Lake high schools and other community volunteers, and the RCD will contribute 5000 seedling conifers  and coordinate the project supervision. 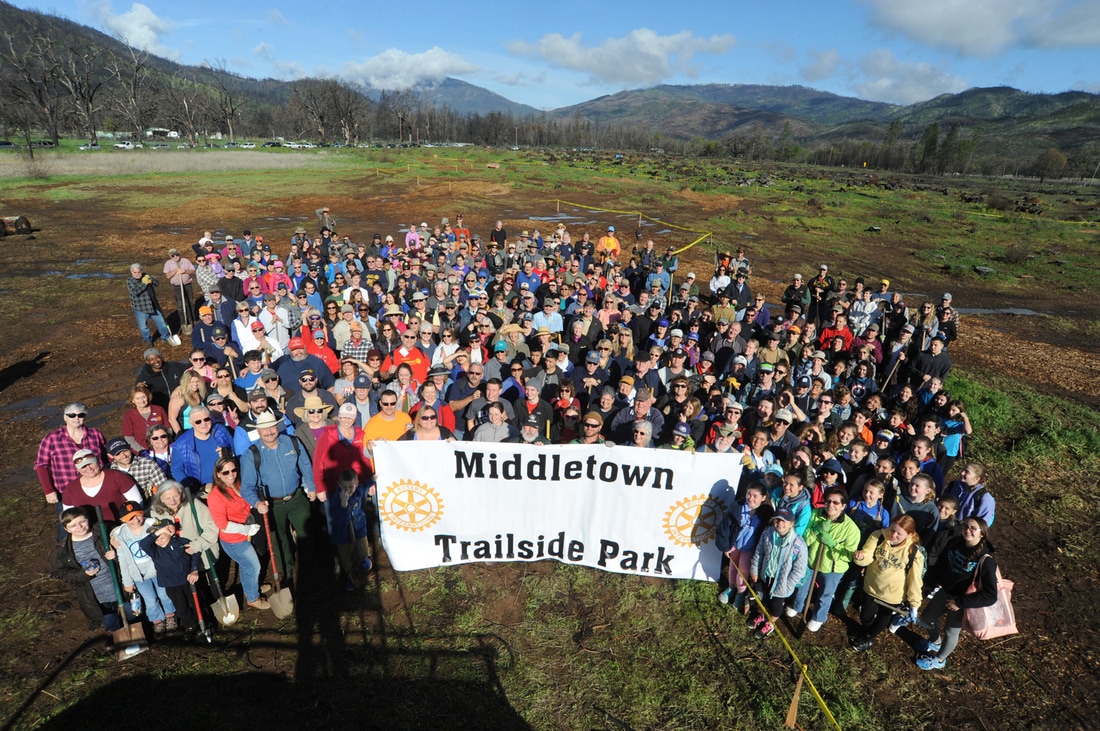